For other ships with the same name, see HMS Resolute.

HMS Resolute was a mid-19th-century barque-rigged ship of the British Royal Navy, specially outfitted for Arctic exploration. Resolute became trapped in the ice and was abandoned. Recovered by an American whaler, she was returned to Queen Victoria in 1856. Timbers from the ship were later used to construct a desk which was then presented to the President of the United States.

In the face of rising concerns on the fate of the Arctic expedition of Sir John Franklin, which had left Britain in 1845 in search of the North West Passage and had not been heard from since, by 1848 the British Government began sending expeditions in search of it. Few existing warships being deemed suitable, six merchant ships were purchased between 1848 and 1850 and converted into exploration ships: two were steamships, HMS Pioneer and HMS Intrepid, the other four (Resolute, Assistance, Enterprise and Investigator) being seagoing sailing ships. The first ship sent to help Franklin was HMS Herald, Captain Henry Kellett. Herald came through Bering Strait to search the western reaches of the Canadian Arctic. In 1850, HMS Investigator, Captain McClure, and HMS Enterprise, Captain Collinson were sent into the Arctic from the west.

Resolute was formerly the barque Ptarmigan which was purchased on 21 February 1850 and was renamed HMS Resolute a month later. The ship was fitted for Arctic service by the Blackwall civilian shipyard Blackwall Yard, with especially strong timbers, an internal heating system, and a polar bear as a figurehead.[1]

During 1850-51 Resolute (flagship), Assistance, Pioneer and Intrepid, searched the eastern Arctic under the overall command of Horatio Thomas Austin. The only positive trace of Franklin they found was the remains of his first winter camp on Beechey Island.

During the winter months, from October 1850-March 1851, Second Master George F. McDougall, from Resolute and Lieutenant Sherard Osborn of Intrepid published at least five numbers of a handwritten newspaper, The Illustrated Arctic News, in what the editors identified as the "Barrow Strait". Upon the return of Resolute to her home port in England, the manuscript paper was printed in London in 1852. Atwood (1997) references extant copies of the papers at both the British Museum and the Scott Polar Research Institute, Cambridge.[2]

After returning to England all four of Austin's vessels were re-provisioned and put under the command of Sir Edward Belcher. The Belcher Expedition was augmented by the addition of a fifth ship: North Star, which was to stay at Beechey Island as a depot ship. Belcher's orders had two objectives: to find Franklin, or evidence about what happened to him by broadening the search in the Eastern Canadian Arctic, and to split this expedition at Beechey Island so that Resolute and Intrepid could head West to search for Franklin there, as well as to find and resupply Investigator and Enterprise.[3] The expedition left England in April 1852, crossed Baffin Bay westward in August 1852. After the rendezvous of the five ships at Beechey Island the squadron was split. The flagship Assistance and her steam tender, Pioneer, headed north up Wellington Channel. Resolute, then under Captain Kellett, and her steam tender, Intrepid, headed west. North Star stayed at Beechy Island.[3] Of the seven Royal Navy ships in the Arctic in 1852, only Enterprise found any trace of Franklin, his officers and men, or his two ships, HMS Erebus and HMS Terror: they found a small quantity of timber on the eastern coast of Victoria Island.

Resolute set up her first winter camp, cutting a dock into the stationary land ice of Dealy Island near the north shore of Viscount Melville Sound.[1] During the spring and summer of 1853, Resolute and Intrepid sledged far and wide searching for clues to Franklin's whereabouts and to hopefully locate Investigator and Enterprise.[3] They found neither Franklin or Enterprise, but did succeed in finding and rescuing Captain McClure and the officers and men of her crew in April 1853, upon their ice-bound ship, HMS Investigator. Captain Kellett ordered McClure to abandon Investigator because she had been and continued to be hopelessly frozen in ice since 1850, without any spring or summer thaw releasing her, and this had caused severe hardship for the men because they had been on reduced rations for over a year. Before winter set in, and while the ice was still open at Dealy Island, The 1852-3 winter camp was broken up, and Resolute and Intrepid sailed eastward.[3] In August 1853, a cold front caused the open passage to freeze up, and Resolute became encased in the floe ice. Since the flow direction of the water, and therefore the ice was from the west to the east, Resolute moved east at about 1.5 knots per day. They prepared Resolute for the winter, stowing all her sails, and upper rigging below.[3] Resolute was still beset by this floe ice in the spring of 1854.[1] In April, Belcher ordered Captain Kellett to abandon Resolute. Only under protest did Kellett do so. He prepared the ship the way he would for winter: taking all her rigging down below except for the very lowest sections of the mast, shipping the rudder, and caulking all the hatches.[3] In May, Captain Kellett left Resolute locked in the slowly moving floe ice, and led his men in a hard march across the ice to reach other ships of the expedition at Beechy Island. Their number included the officers and crew of Investigator who had been rescued by Kellett in the spring of 1853, and the men from Intrepid, as well as Resolute.

Two of the other main vessels of Belcher's fleet were also abandoned, the flagship Assistance and her steam tender, Pioneer. Belcher, and the Assistances and Pioneers arrived at Beechey Island from May–August 1854. The men were divided between North Star and two relief ships: HMS Phoenix and HMS Talbot, which arrived at Beechey Island just as the overcrowded North Star was about to sail. They all left Beechy Island on 29 August 1854.[3]

The British Government announced in The London Gazette that the ships, including Resolute, were still Her Majesty's property, but no salvage was attempted.[1]

On 10 September 1855, the abandoned Resolute was found adrift by the American whaler George Henry, captained by James Buddington of Groton, Connecticut.[1] in an ice floe off Cape Walsingham of Baffin Island, some 1,200 miles (1,900 km) from where she had been abandoned. An October 1856 New York Journal relates Captain Buddington and crew's encounter:

Buddington split his crew, and took 13 men with him on Resolute. He arrived home in New London Connecticut, on Christmas Eve.[5] 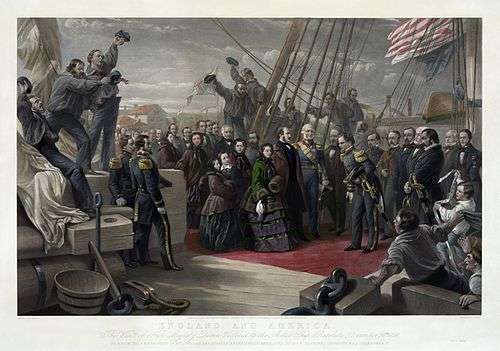 Queen Victoria visits Resolute, 16 December 1856, after its rediscovery and return to the British by the Americans.

Although most of the expeditions seeking the lost Franklin expedition before 1856 were funded by either the British government or by public subscription from within the British Empire, two expeditions were funded by Henry Grinnell, a New York merchant and shipowner who had grown up in New Bedford, with additional United States government assistance. Senator James Mason, Virginia, presented Congress with the bill to restore Resolute and return her to England as a gesture of "national courtesy". Grinnell wrote in support of this bill. The United States Congress bought her for $40,000 and then had her refitted and sailed to England under the command of Commander Henry J. Hartstene, where she was presented to Queen Victoria on 13 December 1856 as a token of comity.[1]

Both Grinnell and Lady Jane Franklin had hoped that the restored Resolute would be employed for a further search for the Franklin expedition, but evidence found by John Rae having proved beyond any reasonable doubt that the men were all dead, the British government declined. Instead, Lady Franklin organised another private expedition under Francis Leopold McClintock, which in 1859 located the only written account of the fate of Franklin.

Resolute served in the Royal Navy from 1856, never leaving home waters, until she was retired and broken up in 1879.[1] The Canadian settlement of Resolute, Nunavut, is named for Resolute. In March 2009, British Prime Minister Gordon Brown presented US President Barack Obama with the framed commission of Resolute, and a pen holder made from the wood of another Royal Navy ship, HMS Gannet.

President Barack Obama sitting at the Resolute desk in 2009.

The British government ordered at least three desks to be made from the timbers of the ship, and they were constructed by cabinet makers at the Joiner's Shop of Chatham Dockyard. A large partner's desk was presented to U.S. President Rutherford B. Hayes in 1880 as a gesture of thanks for the rescue and return of Resolute.[1] Since then, this desk - known as the Resolute desk - has been used by every American President except Lyndon Johnson, Richard Nixon and Gerald Ford. Most Presidents have used it as their official desk in the Oval Office, but some have had it in their private study in the Executive Residence. Dwight D. Eisenhower was the first to remove it from the Oval Office, and it was returned to the Oval Office first by John F. Kennedy and then by Jimmy Carter.[1]

A second desk, called the Grinnell Desk or the Queen Victoria Desk, was also made from the timbers of HMS Resolute. This smaller lady's desk was presented to the widow of Henry Grinnell in 1880 in recognition of her husband's generous contributions to the search for Franklin. In 1983 it was given to the New Bedford Whaling Museum and is currently in their collection in New Bedford, Massachusetts.

A third desk was commissioned by Queen Victoria and appears to have been used aboard the Royal Yacht Victoria & Albert. This remains part of the Royal Collection and is now on long-term loan to the Royal Naval Museum in Portsmouth.

This article is issued from Wikipedia - version of the 11/13/2016. The text is available under the Creative Commons Attribution/Share Alike but additional terms may apply for the media files.