This article is about the geological epoch. For dating the Holocene Era, see Human Era. For the Bon Iver song, see Holocene (song).

The Holocene (pronunciation: /ˈhɒləˌsiːn, ˈhoʊ-/)[1][2] is the geological epoch that began after the Pleistocene[3] at approximately 9,700 BCE.[4] The term "Recent" (usually capitalised) has often been used as an exact synonym of "Holocene", although this usage is discouraged in 21st-century science.[5] The Holocene is part of the Quaternary period. Its name comes from the Ancient Greek words ὅλος (holos, whole or entire) and καινός (kainos, new), meaning "entirely recent".[6] It has been identified with the current warm period, known as MIS 1, and can be considered an interglacial in the current ice age based on that evidence.

The Holocene also encompasses the growth and impacts of the human species worldwide, including all its written history, development of major civilizations, and overall significant transition toward urban living in the present. Human impacts on modern-era Earth and its ecosystems may be considered of global significance for future evolution of living species, including approximately synchronous lithospheric evidence, or more recently atmospheric evidence of human impacts. Given these, a new term, Anthropocene, is specifically proposed and used informally only for the very latest part of modern history involving significant human impact.[7]

It is accepted by the International Commission on Stratigraphy that the Holocene started approximately 11,700 years ago.[4] The epoch follows the Pleistocene and the last glacial period (local names for the last glacial period include the Wisconsinan in North America,[8] the Weichselian in Europe,[9] the Devensian in Britain,[10] the Llanquihue in Chile[11] and the Otiran in New Zealand[12]). The Holocene can be subdivided into five time intervals, or chronozones, based on climatic fluctuations:[13]

The Blytt–Sernander classification of climatic periods defined, initially, by plant remains in peat mosses, is now being explored currently by geologists working in different regions studying sea levels, peat bogs and ice core samples by a variety of methods, with a view toward further verifying and refining the Blytt–Sernander sequence. They find a general correspondence across Eurasia and North America, though the method was once thought to be of no interest. The scheme was defined for Northern Europe, but the climate changes were claimed to occur more widely. The periods of the scheme include a few of the final pre-Holocene oscillations of the last glacial period and then classify climates of more recent prehistory.

Paleontologists have not defined any faunal stages for the Holocene. If subdivision is necessary, periods of human technological development, such as the Mesolithic, Neolithic, and Bronze Age, are usually used. However, the time periods referenced by these terms vary with the emergence of those technologies in different parts of the world.

Climatically, the Holocene may be divided evenly into the Hypsithermal and Neoglacial periods; the boundary coincides with the start of the Bronze Age in Europe. According to some scholars, a third division, the Anthropocene, has now begun.[14] 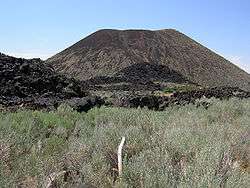 Continental motions due to plate tectonics are less than a kilometre over a span of only 10,000 years. However, ice melt caused world sea levels to rise about 35 m (115 ft) in the early part of the Holocene. In addition, many areas above about 40 degrees north latitude had been depressed by the weight of the Pleistocene glaciers and rose as much as 180 m (590 ft) due to post-glacial rebound over the late Pleistocene and Holocene, and are still rising today.[15]

The sea level rise and temporary land depression allowed temporary marine incursions into areas that are now far from the sea. Holocene marine fossils are known, for example, from Vermont and Michigan. Other than higher-latitude temporary marine incursions associated with glacial depression, Holocene fossils are found primarily in lakebed, floodplain, and cave deposits. Holocene marine deposits along low-latitude coastlines are rare because the rise in sea levels during the period exceeds any likely tectonic uplift of non-glacial origin.

Post-glacial rebound in the Scandinavia region resulted in the formation of the Baltic Sea. The region continues to rise, still causing weak earthquakes across Northern Europe. The equivalent event in North America was the rebound of Hudson Bay, as it shrank from its larger, immediate post-glacial Tyrrell Sea phase, to near its present boundaries.

Temperature variations during the Holocene 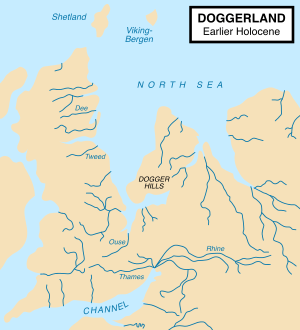 Paleogeographic reconstruction of the North Sea approximately 9,000 years ago during the early Holocene and after the end of the last ice age.

Climate has been fairly stable over the Holocene. Ice core records show that before the Holocene there was global warming after the end of the last ice age and cooling periods, but climate changes became more regional at the start of the Younger Dryas. During the transition from the last glacial to the Holocene, the Huelmo–Mascardi Cold Reversal in the Southern Hemisphere began before the Younger Dryas, and the maximum warmth flowed south to north from 11,000 to 7,000 years ago. It appears that this was influenced by the residual glacial ice remaining in the Northern Hemisphere until the later date.

The Holocene climatic optimum (HCO) was a period of warming in which the global climate became warmer. However, the warming was probably not uniform across the world. This period of warmth ended about 5,500 years ago with the descent into the Neoglacial. At that time, the climate was not unlike today's, but there was a slightly warmer period from the 10th–14th centuries known as the Medieval Warm Period. This was followed by the Little Ice Age, from the 13th or 14th century to the mid-19th century, which was a period of cooling.

Compared to glacial conditions, habitable zones have expanded northwards, reaching their northernmost point during the HCO. Greater moisture in the polar regions has caused the disappearance of steppe-tundra.

The temporal and spatial extent of Holocene climate change is an area of considerable uncertainty, with solar forcing recently proposed to be the origin of cycles identiﬁed in the North Atlantic region. Climate cyclicity through the Holocene (Bond events) has been observed in or near marine settings and is strongly controlled by glacial input to the North Atlantic.[16][17] Periodicities of ~2500, ~1500, and ~1000 years are generally observed in the North Atlantic.[18][19][20] At the same time spectral analyses of the continental record, which is remote from oceanic influence, reveal persistent periodicities of 1000 and 500 years that may correspond to solar activity variations during the Holocene epoch.[21] A 1500-year cycle corresponding to the North Atlantic oceanic circulation may have had widespread global distribution in the Late Holocene.[21]

Animal and plant life have not evolved much during the relatively short Holocene, but there have been major shifts in the distributions of plants and animals. A number of large animals including mammoths and mastodons, saber-toothed cats like Smilodon and Homotherium, and giant sloths disappeared in the late Pleistocene and early Holocene—especially in North America, where animals that survived elsewhere (including horses and camels) became extinct. This extinction of American megafauna has been explained as caused by the arrival of the ancestors of Amerindians; though most scientists assert that climatic change also contributed. In addition, a controversial bolide impact over North America has been hypothesized to have triggered the Younger Dryas.[22]

Throughout the world, ecosystems in cooler climates that were previously regional have been isolated in higher altitude ecological "islands".

The 8.2 ka event, an abrupt cold spell recorded as a negative excursion in the δ18O record lasting 400 years, is the most prominent climatic event occurring in the Holocene epoch, and may have marked a resurgence of ice cover. It is thought that this event was caused by the final drainage of Lake Agassiz, which had been confined by the glaciers, disrupting the thermohaline circulation of the Atlantic.[23] The beginning of the Holocene corresponds with the beginning of the Mesolithic age in most of Europe; but in regions such as the Middle East and Anatolia with a very early neolithisation, Epipaleolithic is preferred in place of Mesolithic. Cultures in this period include Hamburgian, Federmesser, and the Natufian culture, during which the oldest inhabited places still existing on Earth were first settled, such as Jericho in the Middle East.[24] There is also evolving archeological evidence of proto-religion at locations such as Göbekli Tepe, as long ago as the 9th millennium BCE.[25]

This article is issued from Wikipedia - version of the 12/2/2016. The text is available under the Creative Commons Attribution/Share Alike but additional terms may apply for the media files.