Mawlid (Arabic: مَولِد النَّبِي‎‎ mawlidu n-nabiyyi, "Birth of the Prophet", sometimes simply called in colloquial Arabic مولد mawlid, mevlid, mevlit, mulud among other vernacular pronunciations; sometimes ميلاد mīlād) is the observance of the birthday of the Islamic prophet Muhammad which is celebrated often on the 12th day of Rabi' al-awwal, the third month in the Islamic calendar.[2] The 12th Day of Rabi' al-awwall is the most popular date from a list of many dates that are reported as the birth date.

The origin of Mawlid observance reportedly dates back to the period of the early four Rashidun Caliphs of Islam.[1][3] The Ottomans declared it an official holiday in 1588.[4] The term Mawlid is also used in some parts of the world, such as Egypt, as a generic term for the birthday celebrations of other historical religious figures such as Sufi saints.[5]

Most denominations of Islam approve of the commemoration of Muhammad's birthday;[6][7] however, some denominations including Wahhabism/Salafism, Deobandism and the Ahmadiyya (Qadiyani) disapprove its commemoration, considering it an unnecessary religious innovation (bid'ah or bidat).[8] Mawlid is recognized as a national holiday in most of the Muslim-majority countries of the world except Saudi Arabia and Qatar which are officially Wahhabi/Salafi.[9][10][11]

Mawlid is derived from the Arabic root word (Arabic: ولد‎‎), meaning to give birth, bear a child, descendant.[12] In contemporary usage, Mawlid refers to the observance of the birthday of Muhammad.[2]

Along with being referred to as the celebration of the birth of Muhammad, the term Mawlid also refers to the 'text especially composed for and recited at Muhammad's nativity celebration' or "a text recited or sung on that day".[13] Other terms used for this event include: 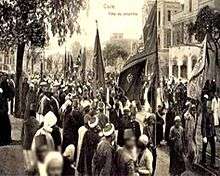 Mawlid an-Nabi procession at Boulac Avenue in 1904 at Cairo, Egypt.

In early days of Islam, observation of Muhammad's birth as a holy day was usually arranged privately and later there was an increased number of visitors to the Mawlid house that was open for the whole day specifically for this celebration.[19] This celebration was introduced into the city Sabta by Abu 'l'Abbas al-Azafi as a way of strengthening the Muslim community and to counteract Christian festivals.[20]

The early celebrations, included elements of Sufic influence, with animal sacrifices and torchlight processions along with public sermons and a feast.[6][21] The celebrations occurred during the day, in contrast to modern day observances, with the ruler playing a key role in the ceremonies.[22] Emphasis was given to the Ahl al-Bayt with presentation of sermons and recitations of the Qur'an.

According to the hypothesis of Nico Kaptein of Leiden University, the Mawlid was initiated by the Fatimids,[23] with Marion Holmes Katz adding "The idea that the celebration of the mawlid originated with the Fatimid dynasty has today been almost universally accepted among both religious polemicists and secular scholars."[24] This Shia origin is frequently noted by those Sunnis who oppose Mawlid.[25] Among Sunnis, the Mawlid celebration emerged in the 12th century,[26] and the first detailed description of a Sunni Mawlid celebration was of one sponsored by emir Gökböri.[27]

A banner with Maulid greetings in Dar es Salaam, Tanzania.

Among Muslim scholars, the legality of Mawlid "has been the subject of intense debate" and has been described as "perhaps one of the most polemical discussions in Islamic law".[17] Traditionally, most Sunni and nearly all of the Shia scholars have approved of the celebration of Mawlid,[6][7][28][29][30] while Wahhabi and Ahmadiyya[31] scholars oppose the celebration.[32]

Examples of historic Sunni scholars who permitted the Mawlid include the Shafi'i scholar Al-Suyuti (d 911 A.H.) who stated that:

The Shafi'i scholar Ibn Hajar al-Asqalani (d 852 A.H.) too approved of the Mawlid[34] and states that:

As for what is performed on the day of the Mawlid, one should limit oneself to what expresses thanks to God, such as the things that have already been mentioned: [Qur'anic] recitation, serving food, alms-giving, and recitation of praise [poems] about the Prophet-may God bless him and grant him peace-and asceticism which motivate people to perform good deeds and act in view of the next world.[35]

The Damascene Shafi'i scholar Abu Shama (d 665 A.H.) (who was a teacher of Imam al-Nawawi (d 676 A.H.)) also supports the celebration of the Mawlid[36][37] as does the Maliki scholar Ibn al-Hajj (d 737 A.H.) who spoke positively of the observance of the Mawlid in his book al-Madhkal.[38] Likewise, the Shafi'i Egyptian scholar Ibn Hajar al-Haytami (d. 974 A.H.) was an avid supporter of the Mawlid and wrote a text in praise of it.[39] This was supported and commented on by the Egyptian scholar and former head of Al-Azhar University Ibrahim al-Bajuri[39] and by the Hanafi Syrian Mufti Ibn Abidin.[40] Another Hanafi Mufti Ali al-Qari (d. 1014 A.H.) too supported the celebration of the Mawlid and wrote a text on the subject[41] as did the Moroccan Maliki scholar Muḥammad ibn Jaʿfar al-Kattānī (d. 1345 A.H.).[42] Ibn al-Jazari (d. 833 A.H.), a Syrian Shafi'i scholar considers the celebration of the Mawlid to be a means of gaining Paradise.[43]

In the Muslim world, the majority of Sunni Islamic scholars are in favor of the Mawlid.[44] Examples include the former Grand Mufi of Al-Azhar University Ali Gomaa,[45] Muhammad Alawi al-Maliki[46][47] of Saudi Arabia, Yusuf al-Qaradawi,[48][49] the primary scholar of the Muslim Brotherhood movement, Habib Ali al-Jifri,[50] Muhammad Tahir-ul-Qadri,[51][52]Muhammad bin Yahya al-Ninowy[52][53] of Syria, Muhammad Ibn Ahmad al-Khazraji, president of the Heritage and History Committee of the United Arab Emirates[54] and Zaid Shakir, all of whom subscribe to Sunni Islam, have given their approval for the observance of Mawlid.

The Mawlid was not accepted by all scholars.[55] Taj al-Din al-Fakihani (d. 1331), an Egyptian Maliki, considered Mawlid to be a blameworthy innovation that was either makruh or haram.[56] This view was shared by fellow Egyptian Maliki Ibn al-Haj al-Abdari, who added that the celebration was never practiced by the Salaf.[57] However Ibn al-Haj affirms the auspicious qualities of the month of the Mawlid in the most effusive terms[58] and considers Muhammad's date of birth as a particularly blessed time of the year.[59] The Maliki scholar Al-Shatibi considered Mawlid an illegitimate innovation.[60] The Andalusian jurist Abu 'Abd Allah al-Haffar (d. 1408) opposed Mawlid, noting that had the Sahaba celebrated it then its exact date would not be a matter of uncertainty.[61]

Ibn Taymiyya's position on the Mawlid has been described as "paradoxical" and "complex" by some academics. He ruled that it was a reprehensible (makrūh) devotional innovation and criticised those who celebrated the Mawlid out of a desire to imitate the Christian celebration of Jesus' birthday.[62][63] At the same time, he recognised that some observe the Prophet's birthday out of a desire to show their love and reverence of the Prophet and thus deserve a great reward for their good intentions.[62][64][65][66]

The Salafi writer Hamid al-Fiqi (d. 1959) criticised Ibn Taymiyya for holding this view and stating that "How can they receive a reward for this when they are opposing the guidance of God's Messenger (pbuh)?".[47]

The Ahmadiyya fall into the group who oppose Mawlid; however, they hold gatherings called jalsa seerat-un-Nabi commemorating the life and legacy of Muhammad oriented towards both Muslim and non-Muslim audiences. These gatherings are not held on any specific date, rather they may be held throughout the year.[67] Sekaten fair in Indonesia, a week-long celebration of Mawlid. Mawlid is celebrated in almost all Islamic countries, and in other countries that have a significant Muslim population, such as India, the United Kingdom, Nepal, Sri Lanka, France, Germany, Italy, Russia[68] and Canada.[69][70][71][72][73][74][75][76][77] The only exceptions are Qatar and Saudi Arabia where it is not an official public holiday and is forbidden.[78][79][80] However, as a result of Wahhabi and other strict traditionalist Muslim influence, since the last decades of the late 20th century there has been a trend to "forbid or discredit" Mawlid (along with similar festivals) in the Sunni Muslim world.[81][82]

Often organized in some countries by the Sufi orders,[13] Mawlid is celebrated in a carnival manner, large street processions are held and homes or mosques are decorated. Charity and food is distributed, and stories about the life of Muhammad are narrated with recitation of poetry by children.[83][84] Scholars and poets celebrate by reciting Qaṣīda al-Burda Sharif, the famous poem by 13th-century Arabic Sufi Busiri. A general Mawlid appears as "a chaotic, incoherent spectacle, where numerous events happen simultaneously,all held together only by the common festive time and space".[85] These celebrations are often considered an expression of the Sufi concept of the pre-existence of Muhammad .[86] However,the main significance of these festivities is expression of love for Muhammad.[85]

During Pakistan's Mawlid the day starts with a 31-gun salute in federal capital and a 21-gun salute at the provincial capitals and religious hymns are sung during the day.[87]

In many parts of Indonesia, the celebration of the Mawlid al-nabi "seems to surpass in importance, liveliness, and splendour" the two official Islamic holidays of Eid ul-Fitr and Eid al-Adha.[88]

In Qayrawan, Tunisia, Muslims sing and chant hymns of praise to Muhammad, welcoming him in honor of his birth.[89] Also, generally in Tunisia, people usually prepare Assidat Zgougou to celebrate the Mawlid.[90]

Among non-Muslim countries, India is noted for its Mawlid festivities.[91] The relics of Muhammad are displayed after the morning prayers in the Indian state of Jammu and Kashmir at the Hazratbal Shrine, where night-long prayers are also held.[92]

Along with being referred to as the celebration of the birth of Muhammad, the term Mawlid also refers to the 'text especially composed for and recited at Muhammad's nativity celebration' or "a text recited or sung on that day".[13] These texts contain stories of the life of Muhammad, or at least some of the following chapters from his life, briefly summarized below:[13]

These text are only part of the ceremonies. There are many different ways that people celebrate Mawlid, depending on where they are from. There appears to be a cultural influence upon what kind of festivities are a part of the Mawlid celebration. In Indonesia, it is common the congregation recite Simthud Durar, especially among Arab Indonesians.

In some countries, such as Egypt and Sudan, Mawlid is used as a generic term for the celebration of birthdays of local Sufi saints and not only restricted to the observance of the birth of Muhammad.[97] Around 3,000 Mawlid celebrations are held each year. These festivals attract an international audience, with the largest one in Egypt attracting up to three million people honouring Ahmad al-Badawi, a local 13th-century Sufi saint.[5]

This article is issued from Wikipedia - version of the 12/1/2016. The text is available under the Creative Commons Attribution/Share Alike but additional terms may apply for the media files.