Toxicodendron radicans, commonly known as eastern poison ivy[1] or poison ivy, is a poisonous Asian and North American flowering plant that is well known for causing an itching, irritating, and sometimes painful rash in most people who touch it, caused by urushiol, a clear liquid compound in the plant's sap.[2] The species is variable in its appearance and habit, and despite its common name it is not a true ivy (Hedera), but rather a member of the cashew family. Toxicodendron radicans is commonly eaten by many animals, and the seeds are consumed by birds,[3] but poison ivy is most often thought of as an unwelcome weed.

There are numerous subspecies and/or varieties of T. radicans,[4] which can be found growing in any of the following forms; all of which have woody stems:

The deciduous leaves of T. radicans are trifoliate with three almond-shaped leaflets.[8] Leaf color ranges from light green (usually the younger leaves) to dark green (mature leaves), turning bright red in fall; though other sources say leaves are reddish when expanding, turn green through maturity, then back to red, orange, or yellow in the fall. The leaflets of mature leaves are somewhat shiny. The leaflets are 3–12 cm (1.2–4.7 in) long, rarely up to 30 cm (12 in). Each leaflet has a few or no teeth along its edge, and the leaf surface is smooth. Leaflet clusters are alternate on the vine, and the plant has no thorns. Vines growing on the trunk of a tree become firmly attached through numerous aerial rootlets.[9] The vines develop adventitious roots, or the plant can spread from rhizomes or root crowns. The milky sap of poison ivy darkens after exposure to the air.

The urushiol compound in poison ivy is not a defensive measure; rather, it helps the plant to retain water. It is frequently eaten by animals such as deer and bears.[10]

Toxicodendron radicans spreads either vegetatively or sexually. It is dioecious; flowering occurs from May to July. The yellowish- or greenish-white flowers are typically inconspicuous and are located in clusters up to 8 cm (3.1 in) above the leaves. The berry-like fruit, a drupe, mature by August to November with a grayish-white colour.[8] Fruits are a favorite winter food of some birds and other animals. Seeds are spread mainly by animals and remain viable after passing through the digestive tract. 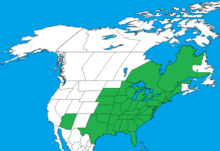 Toxicodendron radicans grows throughout much of North America, including the Canadian Maritime provinces, Quebec, Ontario, Manitoba, and all U.S. states east of the Rocky Mountains,[11] as well as in the mountainous areas of Mexico up to around 1,500 m (4,900 ft). Caquistle or caxuistle is the Nahuatl term for the species. It is normally found in wooded areas, especially along edge areas where the tree line breaks and allows sunshine to filter through. It also grows in exposed rocky areas, open fields and disturbed areas.

It may grow as a forest understory plant, although it is only somewhat shade-tolerant.[8] The plant is extremely common in suburban and exurban areas of New England, the Mid-Atlantic, and the Southeastern United States. The similar species T. diversilobum (western poison oak) and T. rydbergii (western poison ivy) are found in western North America.

Toxicodendron radicans rarely grows at altitudes above 1,500 m (4,900 ft), although the altitude limit varies in different locations.[8] The plants can grow as a shrub up to about 1.2 metres (3.9 ft) tall, as a groundcover 10–25 cm (3.9–9.8 in) high, or as a climbing vine on various supports. Older vines on substantial supports send out lateral branches that may be mistaken for tree limbs at first glance.

It grows in a wide variety of soil types, and soil pH from 6.0 (acidic) to 7.9 (moderately alkaline). It is not particularly sensitive to soil moisture, although it does not grow in desert or arid conditions. It can grow in areas subject to seasonal flooding or brackish water.[8]

It is more common now than when Europeans first arrived in North America. The development of real estate adjacent to wild, undeveloped land has engendered "edge effects", enabling poison ivy to form vast, lush colonies in these areas. It is listed as a noxious weed in the US states of Minnesota and Michigan and in the Canadian province of Ontario.

Outside North America, T. radicans is also found in the temperate parts of Asia, in Japan, Taiwan, the Russian islands of Sakhalin and the Kuriles, and in parts of China.[12]

A study by researchers at the University of Georgia found that poison ivy is particularly sensitive to carbon dioxide levels, greatly benefiting from higher concentrations in the atmosphere. Poison ivy's growth and potency has already doubled since the 1960s, and it could double again once carbon dioxide levels reach 560 ppm.[10] The following four characteristics are sufficient to identify poison ivy in most situations: (a) clusters of three leaflets, (b) alternate leaf arrangement, (c) lack of thorns, and (d) each group of three leaflets grows on its own stem, which connects to the main vine.

The appearance of poison ivy can vary greatly between environments, and even within a single area. Identification by experienced people is often made difficult by leaf damage, the plant's leafless condition during winter, and unusual growth forms due to environmental or genetic factors.

Effects on the body

A video describing the effects of poison ivy on the body Urushiol-induced contact dermatitis is the allergic reaction caused by poison ivy. In extreme cases, a reaction can progress to anaphylaxis. Around 15% to 30% of people have no allergic reaction to urushiol, but most people will have a greater reaction with repeated or more concentrated exposure.[16][17]

Over 350,000 people are affected by poison ivy annually in the United States.[18]

The pentadecylcatechols of the oleoresin within the sap of poison ivy and related plants causes the allergic reaction; the plants produce a mixture of pentadecylcatechols, which collectively is called urushiol. After injury, the sap leaks to the surface of the plant where the urushiol becomes a blackish lacquer after contact with oxygen.[2][19]

Urushiol binds to the skin on contact, where it causes severe itching that develops into reddish inflammation or non-coloured bumps, and then blistering. These lesions may be treated with Calamine lotion, Burow's solution compresses, dedicated commercial poison ivy itch creams, or baths to relieve discomfort,[20] though recent studies have shown some traditional medicines to be ineffective.[21][22] Over-the-counter products to ease itching—or simply oatmeal baths and baking soda—are now recommended by dermatologists for the treatment of poison ivy.[23] A plant-based remedy cited to counter urushiol-induced contact dermatitis is jewelweed, and a jewelweed mash made from the living plant was effective in reducing poison ivy dermatitis, supporting ethnobotanical use, while jewelweed extracts had no positive effect in clinical studies.[24][25][26][27] Others argue that prevention of lesions is easy if one practices effective washing, using plain soap, scrubbing with a washcloth, and rinsing three times within two to eight hours of exposure.[28]

The oozing fluids released by scratching blisters do not spread the poison. The fluid in the blisters is produced by the body and it is not urushiol itself.[29] The appearance of a spreading rash indicates that some areas received more of the poison and reacted sooner than other areas or that contamination is still occurring from contact with objects to which the original poison was spread. Those affected can unknowingly spread the urushiol inside the house, on phones, door knobs, couches, counters, desks, and so on, thus in fact repeatedly coming into contact with poison ivy and extending the length of time of the rash. If this has happened, wipe down the surfaces with bleach or a commercial urushiol removal agent. The blisters and oozing result from blood vessels that develop gaps and leak fluid through the skin; if the skin is cooled, the vessels constrict and leak less.[30] If poison ivy is burned and the smoke then inhaled, this rash will appear on the lining of the lungs, causing extreme pain and possibly fatal respiratory difficulty.[31] If poison ivy is eaten, the mucus lining of the mouth and digestive tract can be damaged.[32] A poison ivy rash usually develops within a week of exposure and can last anywhere from one to four weeks, depending on severity and treatment. In rare cases, poison ivy reactions may require hospitalization.[33]

Urushiol oil can remain active for several years, so handling dead leaves or vines can cause a reaction. In addition, oil transferred from the plant to other objects (such as pet fur) can cause the rash if it comes into contact with the skin.[34][35] Clothing, tools, and other objects that have been exposed to the oil should be washed to prevent further transmission.

People who are sensitive to poison ivy can also experience a similar rash from mangoes. Mangoes are in the same family (Anacardiaceae) as poison ivy; the sap of the mango tree and skin of mangoes has a chemical compound similar to urushiol.[36] A related allergenic compound is present in the raw shells of cashews.[37] Similar reactions have been reported occasionally from contact with the related Fragrant Sumac (Rhus aromatica) and Japanese lacquer tree. These other plants are also in the Anacardiaceae family.

Immediate washing with soap and cold water or rubbing alcohol may help prevent a reaction. Hot water should not be used, as it causes one's pores to open up and admit the oils from the plant.[38] During a reaction, calamine lotion or diphenhydramine may help mitigate symptoms. Corticosteroids, either applied to the skin or taken by mouth, may be appropriate in extreme cases. An astringent containing aluminum acetate (such as Burow's solution) may also provide relief and soothe the uncomfortable symptoms of the rash.[39]

This article is issued from Wikipedia - version of the 12/1/2016. The text is available under the Creative Commons Attribution/Share Alike but additional terms may apply for the media files.