German Expressionism refers to a number of related creative movements beginning in Germany before the First World War that reached a peak in Berlin during the 1920s. These developments in Germany were part of a larger Expressionist movement in north and central European culture in fields such as architecture, dance, painting, sculpture, as well as cinema. This article deals primarily with developments in German Expressionist cinema before and immediately after World War I. 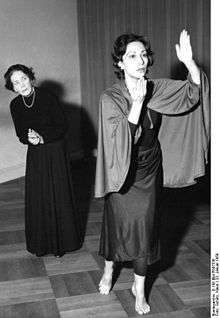 Still from the 1920 film The Cabinet of Dr. Caligari

The German Expressionist movement was initially confined to Germany due to the isolation the country experienced during World War I. In 1916, the government had banned foreign films. The demand from theaters to generate films led to an increase in domestic film production from 24 films in 1914 to 130 films in 1918. With inflation also on the rise, Germans were attending films more freely because they knew that their money's value was constantly diminishing.[2]

Besides the films' popularity within Germany, by 1922 the international audience had begun to appreciate German cinema, in part due to a decreasing anti-German sentiment following the end of World War I. By the time the 1916 ban on imports was lifted, Germany had become a part of the international film industry.[2]

Various European cultures of the 1920s embraced an ethic of change and a willingness to look to the future by experimenting with bold, new ideas and artistic styles. The first Expressionist films made up for a lack of lavish budgets by using set designs with wildly non-realistic, geometrically absurd angles, along with designs painted on walls and floors to represent lights, shadows, and objects. The plots and stories of the Expressionist films often dealt with madness, insanity, betrayal and other "intellectual" topics triggered by the experiences of World War I (as opposed to standard action-adventure and romantic films). Later films often categorized as part of the brief history of German Expressionism include Metropolis (1927) and M (1931), both directed by Fritz Lang. This trend was a direct reaction against realism. Its practitioners used extreme distortions in expression to show an inner emotional reality rather than what is on the surface.[3]

The extreme anti-realism of Expressionism was short-lived, fading away after only a few years. However, the themes of Expressionism were integrated into later films of the 1920s and 1930s, resulting in an artistic control over the placement of scenery, light, etc. to enhance the mood of a film. This dark, moody school of film making was brought to the United States when the Nazis gained power and a number of German filmmakers emigrated to Hollywood. These German directors found U.S. movie studios willing to embrace them, and several German directors and cameramen flourished there, producing a repertoire of Hollywood films that had a profound effect on film as a whole.[4] Nazi film theorist Fritz Hippler though was a supporter of expressionism. Two further films produced in Nazi Germany using the expressionist style were “Das Stahltier” (The Animal of Steel) in 1935 by Willy Zielke and “Michelangelo. Das Leben eines Titanen” (Michelangelo. The Life of a Titan) in 1940 by Curt Oertel.[5]

Two genres that were especially influenced by Expressionism are horror film and film noir. Carl Laemmle and Universal Studios had made a name for themselves by producing such famous horror films of the silent era as Lon Chaney's The Phantom of the Opera. German filmmakers such as Karl Freund (the cinematographer for Dracula in 1931) set the style and mood of the Universal monster movies of the 1930s with their dark and artistically designed sets, providing a model for later generations of horror films. Directors such as Fritz Lang, Billy Wilder, Otto Preminger, Alfred Hitchcock, Orson Welles, Carol Reed and Michael Curtiz introduced the Expressionist style to crime dramas of the 1940s, expanding Expressionism's influence on modern filmmaking.

The German silent cinema was arguably far ahead of Hollywood during the same period.[6] The cinema outside Germany benefited both from the emigration of German film makers and from German expressionist developments in style and technique that were apparent on the screen. The new look and techniques impressed other contemporary film makers, artists and cinematographers, and they began to incorporate the new style into their work.

In 1924, Alfred Hitchcock was sent by Gainsborough Pictures to work as an assistant director and art director at the UFA Babelsberg Studios in Berlin on the film The Blackguard.[7] The immediate effect of the working environment in Germany can be seen in his expressionistic set designs for that film. Hitchcock later said, "I...acquired a strong German influence by working at the UFA studios [in] Berlin".[6]

German expressionism would continue to influence Hitchcock throughout his career. In his third film, The Lodger, Hitchcock introduced expressionist set designs, lighting techniques, and trick camera work to the British public against the wishes of his studio. His visual experimentation included the use of an image of a man walking across a glass floor shot from below, a concept representing someone pacing upstairs,[6] This influence continued through the highly successful movie Psycho in 1960, wherein Norman Bates' blurred image, seen through a shower curtain, is reminiscent of Nosferatu shown through his shadow. Hitchcock's film-making in turn influenced many other film makers, and so has been one of the vehicles that propelled the continued use of German expressionist techniques, albeit less frequently.

Ambitious adaptations of the style are depicted throughout the contemporary filmography of director Tim Burton. His 1992 film Batman Returns is often cited as a modern attempt to capture the essence of German expressionism. The angular building designs and severe-looking city squares of Gotham City evoke the loom and menace present in Lang's Metropolis. Burton's expressionistic influences are most apparent in the fairy-tale suburban landscape of Edward Scissorhands. The appearance of the titular Edward Scissorhands (not accidentally) reflects Caligari's somnambulist servant. Burton casts unease in his candy-colored suburb, and the tension is visually unmasked through Edward and his Gothic castle, a last holdout from the past at the end of a suburban street. Burton subverts the Caligari nightmare with an inspired narrative, casting Edward, the outsider, as the hero, and the villagers as the villains. Similarly, Dr. Caligari was the inspiration for the grotesque, bird-like appearance of the Penguin in Burton's 1992 film Batman Returns. The familiar look of Caligari's main character can also be seen in the movie The Crow. With the tight, black outfit, white make-up and darkened eyes, Brandon Lee's character is a close relative to both Cesare, and to Burton's film Edward Scissorhands. Burton was also reportedly influenced by silent films and German Expressionism for his film adaptation of the musical Sweeney Todd: The Demon Barber of Fleet Street, describing the musical as a "silent film with music".

Many critics see a direct tie between cinema and architecture of the time, stating that the sets and scene artwork of Expressionist films often reveal buildings of sharp angles, great heights, and crowded environments, such as the frequently shown Tower of Babel in Fritz Lang’s Metropolis.

Strong elements of monumentalism and modernism appear throughout the canon of German Expressionism. An excellent example of this is Metropolis, as evidenced by the enormous power plant and glimpses of the massive yet pristine "upper" city.

German Expressionist painters rejected the naturalistic depiction of objective reality, often portraying distorted figures, buildings, and landscapes in a disorienting manner that disregarded the conventions of perspective and proportion. This approach, combined with jagged, stylized shapes and harsh, unnatural colors, were used to convey subjective emotions.

A number of artists and craftsmen working in the Berlin theater brought the Expressionist visual style to the design of stage sets. This, in turn, had an eventual influence on films dealing with fantasy and horror.

The prime example is Robert Wiene's dream-like film The Cabinet of Dr. Caligari (1920) which is universally recognized as an early classic of Expressionist cinema. Hermann Warm, the film's art director, worked with painters and stage designers Walter Reimann and Walter Röhrig to create fantastic, nightmarish sets with twisted structures and landscapes with sharp-pointed forms and oblique, curving lines. Some of these designs were constructions, others were painted directly onto canvases.

German Expressionist films produced in the Weimar Republic immediately following the First World War not only encapsulate the sociopolitical contexts in which they were created, but also rework the intrinsically modern problems of self-reflexivity, spectacle and identity.

Following the esteemed critiques of Siegfried Kracauer and Lotte Eisner, these films are now viewed as a kind of collective consciousness, so inherently tied are they to their social milieu. Briefly mentioned by J. P. Telotte in his analysis of German film, “German Expressionism: A Cinematic/ Cultural Problem”, expressionism focuses on the “power of spectacles”[12] and offers audiences “a kind of metonymic image of their own situation”.[12]

This film movement paralleled Expressionist painting and theater in rejecting realism. The creators in the Weimar Period sought to convey inner, subjective experience through external, objective means. Their films were characterized by highly stylized sets and acting; they used a new visual style which embodied high contrast and simple editing. The films were shot in studios where they could employ deliberately exaggerated and dramatic lighting and camera angles to emphasize some particular affect - fear, horror, pain. Aspects of Expressionist techniques were later adapted by such directors as Alfred Hitchcock and Orson Welles and were incorporated into many American gangster and horror films. Some of the major filmmakers of this time were F. W. Murnau, Erich Pommer, and Fritz Lang. The movement ended after the currency stabilized, making it cheaper to buy movies abroad. The UFA financially collapsed and German studios began to deal with Italian studios which led to their influence in style of horror and films noir. The American influence on the film industry would also lead some film makers to continue their career in the US. The UFA's last film was Der Blaue Engel (1930), considered a masterpiece of German Expressionism.

Two works about the era are Lotte Eisner's The Haunted Screen and Sigfried Kracauer's From Caligari to Hitler.[13] Kracauer examines German cinema from the Silent/Golden Era and eventually concludes that German films made prior to Hitler's takeover and the rise of the Third Reich all hint at the inevitability of Nazi Germany. For Eisner, German Expressionist cinema is a visual manifestation of Romantic ideals. She closely examines staging, cinematography, acting, scenarios, and other cinematic elements in films by Pabst, Lubitsch, Lang (her obvious favorite), Riefenstahl, Harbou, and Murnau. More recent German Expressionist scholars examine historical elements of German Expressionism, such as inflation/economics, UFA, Erich Pommer, Nordisk, and Hollywood.

This article is issued from Wikipedia - version of the 11/19/2016. The text is available under the Creative Commons Attribution/Share Alike but additional terms may apply for the media files.